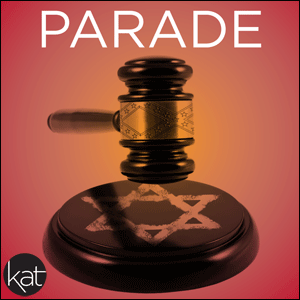 Synopsis
The tragic, true story of the trial and lynching of a man wrongly accused of murder is brought to emotional and theatrical life by acclaimed playwright Alfred Uhry (DRIVING MISS DAISY) and Jason Robert Brown, one of Broadway’s most promising young composers (SONGS FOR A NEW WORLD).

In 1913, Leo Frank, a Brooklyn-raised Jew living in Georgia, is put on trial for the murder of 13-year-old Mary Phagan, a factory worker under his employ. Already guilty in the eyes of everyone around him, a sensationalist publisher and a janitor’s false testimony seal Leo’s fate. His only defenders are a governor with a conscience, and, eventually, his assimilated Southern wife who finds the strength and love to become his greatest champion.

Daring, innovative and bold, PARADE won well-earned Tony Awards for Best Book and Best Score in 2000. Its subject matter offers a moral lesson about the dangers of prejudice and ignorance that should not be forgotten.

Catherine Callahan (Mary Phagan) is so excited to be performing with KAT for the 3rd time!! Recent roles – MCP: Natalie, Next to Normal; KAT 2nd Stage: Dorothy, The Wizard of Oz; SMP: Lily, The Secret Garden; MPAT: Toffee, Zombie Prom. Thanks to an amazing production team and cast. Special thanks to David Rohde and Harrison (very happy to be working with you both again), Mom and Dad and 13 great siblings, and Carlo for being a great guardian angel.

Ian Anthony Coleman (Newt Lee/Jim Conley/Riley) is thrilled to be making his KAT debut! He is a graduate of the International Relations and Politics program at Carnegie Mellon University. For two years, he was the Executive Producer of Lunar Gala Fashion Show (the most attended student run event at CMU). He was also the president of CMU’s premier co-ed a cappella group, The Soundbytes. He has appeared on stage in shows such as The Wiz (The Tin Man) at MC Summer Dinner Theatre; Sweeney Todd (Anthony), Into the Woods (The Baker) and Les Miserables (Javert) at The Theatre Lab; The Visit (Bürgermeister) and Me & My Girl (Ensemble) through Scotch’nSoda Theatre at CMU.

Joanna Frezzo (Essie) is thrilled to be making her KAT debut. She holds a BM in Musical Theater from Catholic University. She most recently starred as Gabrielle in Muse at the Chatterton Short Play Festival in NYC. Other credits – GAC: Little Shop of Horrors; The John F. Kennedy Center: An American Playlist, A New Years Eve Gala; The Music Center at Strathmore: Take Joy!; WS: Pirates of Penzance, Iolanthe, The Mikado. Many thanks to the cast and crew for their hard work and dedication, and to her wonderful family and friends for their constant support!

Elizabeth Gillespie (Monteen) is delighted to be in her first production with KAT. She recently appeared as Mable in LSDT’s production of Pirates of Penzance, which she also choreographed. Other performances include the Apache Dancer and Wife in MCP’s Joseph…Dreamcoat and Eliza in FCT’s The King and I. Elizabeth graduated from Westminster Choir College of Rider University in 2009 with a degree in music education, and currently teaches music at Dominion Christian School.

Eric Jones (Judge Roan/Ensemble) is honored to be making his sixth appearance with KAT in this incredible production! He was last seen here in a WATCH-nominated turn as Ian in Rooms – a Rock Romance. Other favorite shows – KAT: Sunday in the Park with George, Violet; MET: A Clockwork Orange, Bloody Bloody Andrew Jackson; SSS: The Little Dog Laughed; OOH: City of Angels; GS: The Triangle Factory Fire Project, I Am My Own Wife; GAC: Children of Eden, The Rocky Horror Show. He’d like to thank the entire cast and crew for this amazing experience, my wonderful family and friends, Brittney for her love and support, and YOU for supporting live theatre!

Bobby Libby (Leo Frank) is excited to return to KAT after playing Harry Houdini in Ragtime. He was most recently seen as Claude in Hair with StillPointe Theatre Initiative in Baltimore, with whom he also appeared as Director Bob in The Bubbly Black Girl Sheds Her Chameleon Skin earlier this year. Other previous credits include Song for a Future Generation (Log) and the MooseHumps Trilogy with Lights Out Theatre Company in Chicago. Bobby holds a BS in Theatre from Towson University, appearing in Angels in America (Louis), Urinetown (Lockstock), Hedwig and the Angry Inch (Hedwig), The Marriage of Bette & Boo (Matthew). Special thanks to Abbie.

Eben K Logan (Minnie McKnight/Angela) is glad to be participating in her second show at KAT. She was last seen as Susan in Red Branch Theatre’s Tick, Tick….Boom!, and was recently on the KAT main stage as Sarah in Ragtime. She would like to thank the cast and the production team for putting up her hectic schedule, and sends love to her family and friends. Enjoy the show!!

Michael Nansel (Dorsey) is proud to do his sixth show with KAT. He won the 2003 WATCH for Lead Actor in a Musical (Fred Graham/Kiss Me, Kate/TAP) and Featured Actor in a Musical (Juan Peron/Evita/MP), and was nominated in 2007 (Lockstock/Urinetown/KAT & Sweeney Todd/KAT). Since 2008, Michael has concentrated on opera and the professional stage, but couldn’t stop himself from doing his tenth show on stage with Craig (has to be 20 total in some capacity). The cigar is on you. Gretchen you will be missed. He coaches with Rosemary Dyer, Patrick O’Donnell and Andrea Delgiudice.

Sarah Anne Sillers (Iola Stover) is thrilled to be joining the KAT family! Sarah Anne returns to her Maryland roots this fall after completing her B.A. in English from Princeton University. She was most recently seen in Abduction from the Seraglio at the In Series (Ensemble; Dance Captain). This summer, she performed in Mint’d | Inheritance, a concert of original works presented by NYMF, and was a finalist in the Signature Idol competition at Signature Theatre. Sarah Anne would like to thank everyone involved in Parade for their talent and dedication, and, as always, sends love and gratitude to her wonderful parents.

Harrison Smith (Frankie Epps/Young Soldier/Guard) is thrilled to return to KAT’s main stage. Previous KAT credits – Younger Brother, Ragtime; Henry, Next to Normal (2013 Ruby Griffith Award); Cowardly Lion, The Wizard of Oz (KAT 2nd Stage). Other credits – ASGT: Jack, Into the Woods; Nicky, Avenue Q (2013 Ruby Griffith Award); Male Authority Figure, Hairspray. Special thanks to Craig, David, and Malca for bringing this rarely produced piece to the KAT stage, Darnell for his constant guidance, his parents for their support, Jason Robert Brown for his stunning score, and SMT for just being. Dedicated to the memory of Mary Phagan.

Marni Ratner Whelan (Mrs. Phagan/Sally) is thrilled and excited to make her return to musical theater after a long break to have a family. A graduate from The Boston Conservatory she made her home in NYC. Marni has performed all over the country and in Europe. NYC – Musicals Tonight: Fifty Million Frenchmen; Lavie Productions: Magic to Do; Judith Anderson: Houdini, Margary. Tours – National: Vi Moore, Footloose; European: Featured Singer, Broadway’s Best. Regional – A.R.T. (MA): Maria, Ubu Rock; Publick Theatre (MA): Lois, Kiss Me, Kate; Theatre Barn (MA): Petra, A Little Night Music. Big hugs and kisses to my family for the sacrifice and support.

Stephen P Yednock (Luther Rosser/Officer Ivey/Guard) is thrilled to be returning to KAT once again for his sixth appearance on the main stage. He most recently appeared here (for one performance) as Boatman/Dennis in Sunday in the Park with George. Last year he received a WATCH nomination for playing Nicely Nicely in TCP’s production of Guys and Dolls. Other roles – KAT: Zangara, Assassins; Mushnik, Little Shop of Horrors. SMP: Herr Schultz, Cabaret; Amos, Chicago; Byck, Assassins. MAD: The Player, Rosencrantz and Guildenstern Are Dead (Ruby Griffith Award – Play, First Runner-Up); Marcellus, The Music Man. Big thanks to Malca, Craig, David and Rachel.

Emily Zickler (Lucille Frank) Emily is thrilled to be on stage in her second KAT show! You may have seen her as Diana in Next to Normal last Feb/March. She received her BFA in Acting from Boston University 2012 and recently participated in the Overtures Showcase at Signature Theatre. Previous credits – KAT: Diana, Next to Normal; Huntington Theatre: Emma Goldman/Ensemble, Assassins; Scotty/Ensemble, Merrily We Roll Along; LAMDA: Hamlet, Hamlet. Thanks to the cast and creative team involved in Parade. As always, many, many thanks are owed to my ever-supportive family and friends – you are my biggest fans and I love you!